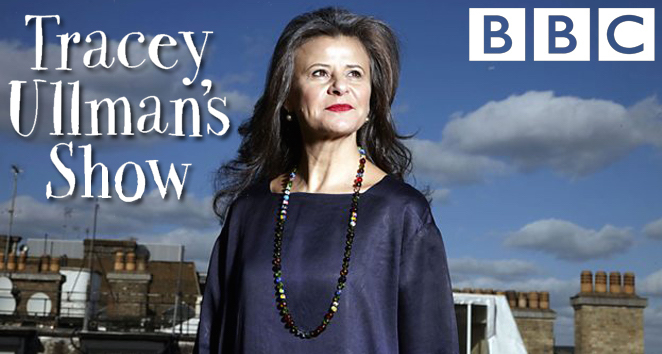 Having enjoyed decades of success in the US, veteran comedian, top impersonator, writer, singer and all-round fabulous HH client TRACEY ULLMAN makes her highly anticipated return to British television screens next week for the first time in 30 years, with her brand new six-part comedy series Tracey Ullman's Show. And it's absolutely hilarious!

The show features an array of extraordinary characters, sketches with a political edge and a series of spot-on impersonations of some of Britain's older actresses and 'National Treasures'. In next Monday's opening episode, TRACEY presents Dame Judi Dench as a delinquent kleptomaniac and Dame Maggie Smith auditioning for a sci-fi show; she mocks the Duchess of Cornwall’s obsession with country pursuits, portrays a dangerously accident-prone massage therapist and a feminist MP whose election pledge to remain topless throughout her term is starting to present challenges. There's also a foot-tapping love song to Britain's local libraries, and Angela Merkel as you've never seen her before, obsessed with her image and jealous of Nicola Sturgeon!

Of her impersonations, TRACEY told the Radio Times this week: “I wanted to do a series of national treasures, which I think we have in England...wonderful older actresses in this country who aren’t afraid to look old. In fact, when America needs a mother they have to import one of ours because sometimes American women have done so much to their faces, they don’t want to look over 60! So I just admire them and thought it was fun to try and be them, and I hope they take it in good spirits.”

Not only are TRACEY's impersonations spot-on, they all come complete with some incredibly realistic makeovers. We don't want to spoil too much or give anything away, but we've seen some images of upcoming characters and they are truly hilarious!

Episode 1 of Tracey Ullman's Show will premiere next Monday 11th January at 10:45pm on BBC1. Don't miss it! It will also be available on-demand throughout the run. To get you excited, check out the launch trailer below, followed by a preview of Episode 1, featuring TRACEY's Judi Dench: