THE NIGHT MANAGER - Sundays On BBC1

Stop everything! The BBC's long-awaited and highly-anticipated television adaptation of John le Carré's novel The Night Manager starts this Sunday 21st February at 9pm on BBC1, starring the wonderful HUGH LAURIE and TOM HIDDLESTON as the two leads.

The six-part drama tells the story of Jonathan Pine (Played by TOM), a former soldier who, working as the night manager in a luxury Cairo hotel, discovers evidence against the utterly ruthless but charming international arms dealer Richard Roper (played by HUGH). But Pine's attempt to help British intelligence capture the criminal has disastrous consequences. Years later, Pine finds himself based in Switzerland, working at a hotel that he discovers is frequented by Roper. Determined to make amends for his previous failure, he reunites with his contact at British intelligence and they form a plan to infiltrate the dealer's inner circle.

Filming for The Night Manager took place in numerous international locations including Morocco (with Marrakech standing in for Cairo), London, the Swiss ski resort of Zermatt and Majorca. The show is shot beautifully and TOM and HUGH shine in their respective roles. It also boasts a very strong ensemble cast that includes Tom Hollander as Roper's long-standing associate Corcoran and Olivia Colman as MI6 agent Burr.

This is going to be huge - tune in on Sunday and don't miss it! Watch the trailer below: 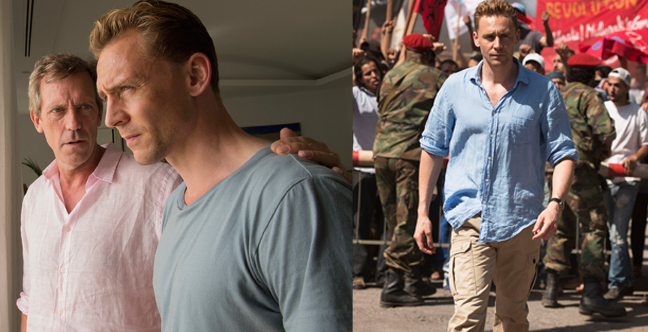