After months of keeping schtum, we can finally reveal that HH client ANTHONY BOYLE will be starring as Scorpius Malfoy, son of the evil Draco Malfoy, in London's most highly-anticipated new production Harry Potter and the Cursed Child Parts One & Two.

For the latest instalment of the beloved Harry Potter series, J.K. Rowling has teamed up with writer Jack Thorne (Glue, This is England) and prolific director John Tiffany (Once) to present an entirely original story told over two instalments.

Harry Potter and the Cursed Child is the sequel to the previous books and films, following Harry and his friends "19 years later" and focusing on the struggles of Harry’s second son, Albus Severus. Fearing being placed in Slytherin on his arrival to Hogwarts, Albus must also carry the legacy of the Potter family name. Meanwhile, Harry is a full-time employee at the Ministry of Magic, a husband and a father. The show will see Harry and his family grapple “with a past that refuses to stay where it belongs” and will include a plethora of well-known characters appearing throughout the play, with magnificent special effects guaranteed!

First previews are only days away and social media has been blowing up today as fans around the world were treated to their first look at what some of the new characters will look like in costume. Above is actor Alex Price as Harry’s former school nemesis Draco Malfoy, and our very own ANTHONY in the role of his son, Scorpius. Rowling has teased that Scorpius might be a hit with the ladies, stating: ‘I've got a feeling Scorpius is going to do nothing to turn girls off the Malfoy men.’

We can’t wait to find out what Draco and Scorpius do next!

Previews commence next week on 7th June 2016 at London's Palace Theatre and the show will take place across Parts One & Two, which will be performed at separate times. Tickets are now on sale - book yours and find out full information about the show and performances at the official Harry Potter play website. But you better be quick because, unsurprisingly, the show is almost completely sold out. GO!!

To whet your appetite, check out the character photoshoot video below to see ANTHONY and other big cast members in their official costumes: 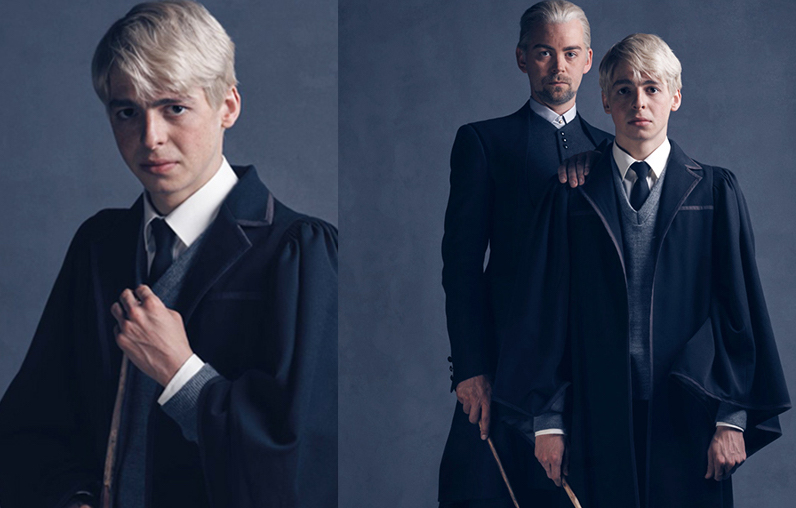